Intrusion and long term sealing are intimately linked in terms of the seal material mechanical properties; both are dependent on the compression set of the elastomer.

High compression set values indicate that the elastomer is able to move irreversibly under load, in other words, once the material has moved, it will not return to its original shape. The consequences of this movement are obvious and can have numerous detrimental and costly effects:

If the seal moves, there is nowhere for the material to move into except into the pipe bore, giving greater intrusion, which in turn results in reduced flow, cleaning difficulties, potential cross contamination of batches and the possibility of seal fragments entering the process flow.

This illustration shows the effects of intrusion, both positive and negative,
resulting in material build up and consequently, cleaning difficulties.

Intrusion, defined in the ASME BPE 2019 standard, is complex and not solely dependent on the seal characteristics but is strongly influenced by the ferrule geometry, clamp type and design, applied torque and installation practices.

Low compression set materials, with little movement under load, result in decreased intrusion and maintain a seal over long periods eliminating the need for re-torquing the sealing joint. This is shown in the chart on the right where, after 800+ days, a low compression set material retains 90% of the original sealing force giving confidence in the seal joint integrity without re-torquing and thereby greatly reducing maintenance costs.

When selecting a material for sealing within a biopharmaceutical process, it is essential to understand the compression set values of the elastomer. A material with a lower value will optimise performance, with less maintenance required to re-torque sealing joints and improved cleaning through a reduction in intrusion.

James Walker’s Elast-O-Pure® EP75 Black has been developed for such environments, with a very low compression set for long-term sealing efficiency. Backed by James Walker expertise and certificated to USP Class VI with excellent resistance to SIP and CIP processes, Elast-O-Pure® EP 75 Black reduces the risk of leakage within the production process for added peace of mind. 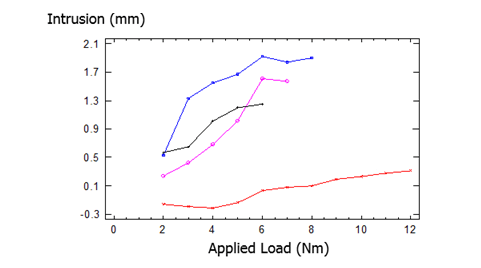 This graph shows the effect of applied toque on intrusion for a range of 1” gaskets.

The importance of elastomer purity

The importance of correct installation