The importance of correct installation

Often overlooked, the correct installation of any seal is key to the overall sealing joint performance.

Incorrect installation due to factors such as the use of the wrong seal, failure to consider misalignment of piping, application of excessive torque when tightening, or the use or lack of lubrication can all result in a compromised sealing joint.

The seal itself is only one small component in a complex sealing arrangement, all of which must work in unison, and be well maintained. There are two ferrules, which must be clean, free from damage and well aligned. The clamp must also be free from damage and torqued to the correct level, as over-torquing the system can be disastrous. Only then, and with the correct seal installed, does optimum sealing of the joint occur.

Here we will highlight some of the common issues that can arise during installation.

Over torque
A common misconception is that the higher the load applied, then the better the joint is sealed. 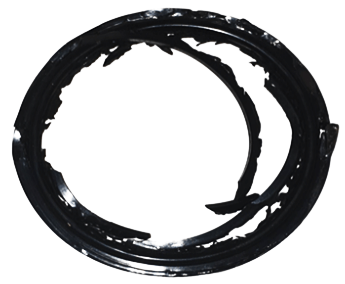 However, this is not so. Applying too much load can actually result in numerous problems that may compromise the sealing joint, including:

To eliminate this, refer to supplier installation instructions and always use a calibrated torque wrench on installation. For a high compression set material, such damage is not observed and it simply moves out of the way, resulting in high intrusion, difficulty in cleaning, possible product contamination and the need to re-torque to avoid leakage.

Incorrect seal used
The outside diameter of ASME BPE for both the ½” and the ¾” hygienic clamp seals are identical, as are the 1” and the 1½”, and this can result in, for example, a ½” seal being used in ¾” joints, giving a greatly reduced flow in the system. This is often interpreted as excessive intrusion, but with low compression set materials, with minimal movement under load, this is simply not possible.

Misalignment
Most operations suffer from misalignment due to thermal cycling during the cleaning cycle. To achieve a reliable sealing joint this must be minimised and not rather on the closing of the clamp to rectify this. Indeed, using the clamp to pull misaligned piping together can result in potential leakage and seal damage.

Lubrication
Whilst lubrication on installation is often recommended for certain seals, for hygienic clamp seals this can have a detrimental effect. Lubrication, even with WFI, can lead to increased intrusion due to reduced friction between the seal and ferrule. Dry installation is recommended to eliminate this.